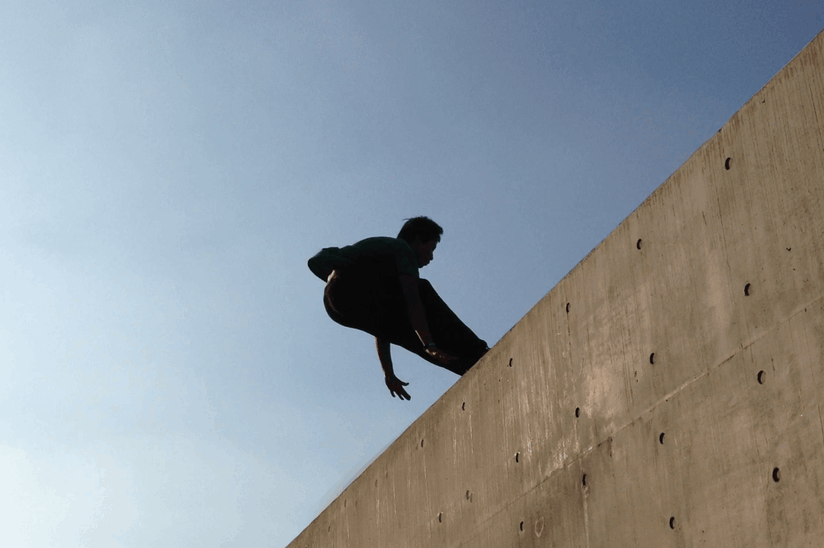 Parkour is a movement art (L’art du deplacement) that utilizes inherent human movements of running, jumping, balancing, hanging, climbing, crawling, and more to overcome obstacles. It was started by nine teenagers in France in the late 1980s. The word “parkour” comes from parcours in French, meaning “road, course, journey”, and in Chinese characters it is the same as ‘tao’ (道).

Having been training parkour since 2004, I would like to share my thoughts on how, in contrast to other sports, it not only consists of routinely accepting impact on the body, but also deliberately pursuing shock. According to the Standard Korean Language Dictionary, the definition of shock is as follows.

By the dictionary definition, the meaning of shock includes physical as well as mental and psychological aspects. “Shock” is a physical language in that it is experienced through sensory organs such as sight, hearing, touch, taste, and smell. To acknowledge physicality is to consider one of the main points in philosophy, the relationship between subject (entity) and object (world). An entity that is thrown into a world of constant danger experiences “pain” through shock. The relationship between this subject and object can be identified as follows.

Helen Keller once said, “Security is mostly a superstition.” Objects (world) are essentially a series of dangers. The “safety” we perceive is not real, and exists merely in our imagination. This state of non-safety, risk can be divided into two different kinds; “risk” that can be taken by the subject, and “danger” that cannot be accepted by the subject (entity).

“Danger” is a natural disaster area, a hazard zone that people have no control over. Nature consists of dangerous phenomena, such as the coronavirus, that are unforeseen by humans. On the contrary, “risk” is a part of the world that humans can control and predict. For example, rock climbing uses harnesses and ropes in case of falls. Thus it becomes a risk that humans can regulate. In this way, to take control over dangers that can be predicted is called “risk-taking”. Many people misunderstand parkour as “danger-taking”, but in reality parkour moves between risk and danger, physically as well as mentally. Through this, parkour is a risk-taking exercise in that it expands the quality and quantity of one’s survival.

In fact, what we call safety and peace is something that can only be felt in the area of acceptable danger, risk. If we think about it carefully, the things that we feel to be safe pose just as much familiar danger. On the contrary, the unfamiliar, different, ambiguous and known dominate in the area of danger. Risk-taking training is to train the survival ability to overcome real danger, by steadily expanding the areas of risk that one can handle. Conversely, constant avoidance or attempts to remove risks in ones daily life results in idleness, of being unable to do anything in the face of real danger. The more one avoids danger by being trapped in the unrealistic, false notion of safety, the greater the danger that comes.

As I teach parkour, I often meet people (adults, parents, etc.) who express interest in parkour after checking if there is a safety device. Paradoxically, this kind of environment causes more injuries than people would expect. Particularly, if beginners train in environments full of mats, scaffolds, and sponges, they start to think ‘this place is safe, and therefore I can try anything”, and thus refrain from using the brain’s natural risk detection system. When humans delegate their “safety” to third parties or shift responsibility, they act recklessly beyond their own limitations without considering their abilities and surroundings. To prevent accidents or injuries, it is important to know what we can do on our own, what we need in certain circumstances, and what risks we can afford in those events.

Based on this principle of risk-taking, if we think about the pursuit of “shock”, we can say that it is an active decision to protect oneself from unintended shock. Then how can we develop sensitivity to spontaneous shock? I have learned from years of coaching and real life training experience that for positive change, the mindset of recognizing with the body is more effective than with knowledge. In other words, learning how to control shock with the body will help the mind recover from shock, and even further growth can be expected.

The safety and effectiveness of parkour’s fall and landing techniques, which protect the body from shock, have already been proven by a number of studies abroad. In 2013, the Journal of Sports Science and Medicine published the article “Ground reaction forces and loading rates associated with parkour and traditional drop landing techniques.” Ten male parkour trainees with an average of 2.9 years of parkour experience were invited to perform parkour landing techniques (using only the heels), and the traditional landing method (front of the feet first), five times each. The amount of impact was measured in the following three areas.

The results were astounding. Parkour landing has less shock on the body, and is safer than traditional landing methods.

So how much difference is there in the shock regulation ability of parkour trainees vs the average person?

For ordinary people who encounter parkour through SNS and media, it may appear as a sport that is destructive to the joints, but research data reveals the opposite. It is not a coincidence that parkour has the most safe landing techniques out of all existing sports. In an urban environment full of rough concrete, exposure to high shock is inevitable in order to implement constant movement using only the bare hands and body, and many trials and errors have helped us devise high-quality landing techniques. If you train parkour the right way, rather than hurting the joints, the “shock” strengthens bone density and connective tissue. This principle is called the “anti-fragile”.

“Anti-fragile” was first conceptualized by Nassim Nicholas Taleb at the Tandon School in New York University. Self-resilience, which is widely implemented in society, means to be able to recover from the impact of physical and mental damage, restored to the same state as before the shock. However, “anti-fragile” means to develop into a better stage, rather than returning to the prior state. Elite parkour athletes possess impressive movements beyond human limitations, as well as a resilient mentality that controls fear and adapts flexibly to difficult environments, because it adheres to this principle of the “anti-fragile”.

Han Byungchul’s “The Palliative Society: Pain Today” warns us how dangerous individuals and society are, those who have forgotten the meaning and value of pain as a result of modern discourse around its ‘meaninglessness”. Modern people’s attempts to achieve happiness without pain end up frustrated and trapped in a lackluster daily life. To pursue a life without pain is to move in the direction of lifelessness. This is why Oxford evolutionary psychology professor Robin Dunbar, known for “Dunbar’s Number”, believed that in advanced countries where there are no risks of daily life, more extreme sports are being developed. This is because only within a dangerous environment can you build self-trust, and thinking beyond yourself, be able to clearly tell who is your enemy or friend.

In SNS and the digital realm, modern people are disconnected as much as they are connected in that physical “pain” is excluded, and so much as a minor inconvenience can be passed by the wave of a finger on the screen’s feed. Such a digital world’s evasive habits infiltrate reality, and eventually change one’s life. Now, more time is afforded to viewing others’ lives than crafting one’s own. Regarding these generational trends, French-born American novelist Anaïs Nin predicted our fate to an unnervingly accurate degree.


And then the day came,
when the risk
to remain tight
in a bud
was more painful
than the risk
it took
to Blossom.

“
In other words, learning how to control shock with the body will help the mind recover from shock, and even further growth can be expected. 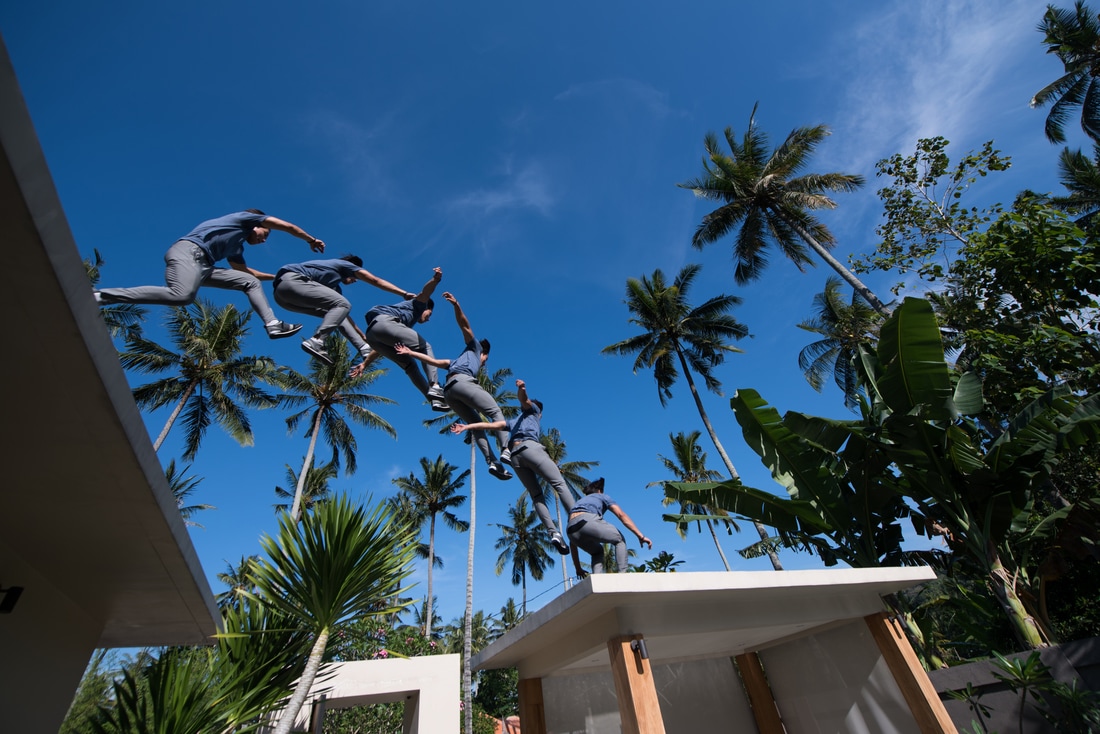 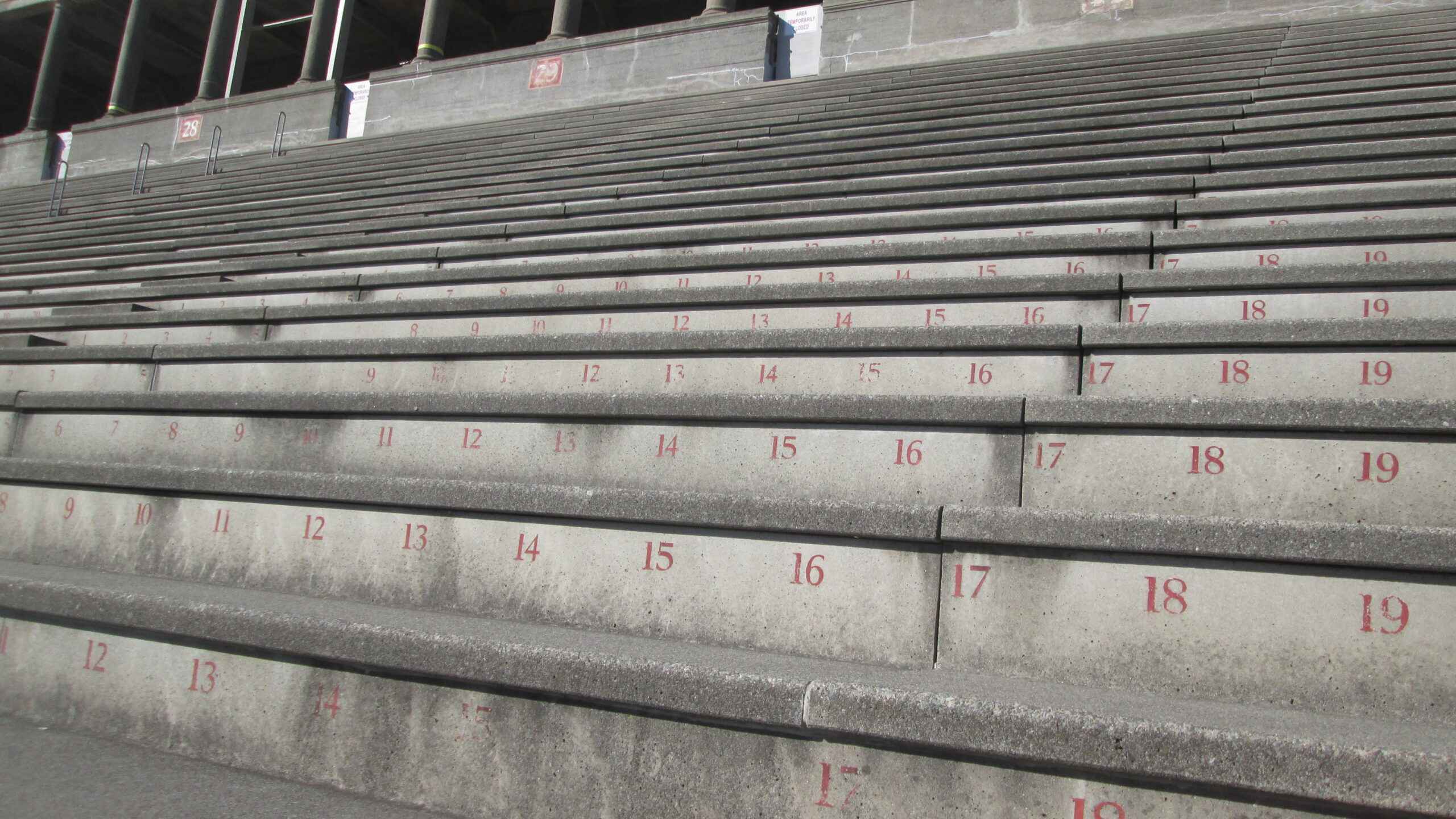